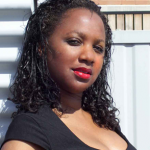 Denise Goins has spent over ten years working in the broadcast industry as a designer, editor and producer. She has collaborated on content in television for the likes of CW Network, Democracy Now!, affiliates of ABC and CBS as well CNN and CBS networks. She is currently working at Fox Business Networks. In addition, she has worked on numerous  projects for the national and international media in post-production and for the web.  She is an active member of NYWIFT (New York Women in Film and Television) and WGAE (Writer’s Guild of Ameria East).

Born and raised in the Midwest, she came to New York City to attend Pratt Institute in Brooklyn, New York, where she received her Bachelor’s of Fine Arts. Shortly thereafter, she moved to Europe where she lived for three years in Italy, France and England. Upon her return home to the United States, she settled in Denver, Colorado where she ultimately began her career in the television industry. Upon her return to New York City, she received her Master’s of Science from New York University.  Her works can be viewed online at http://www.denisegoins.com/  She currently lives and works in New York City.

She most recently created a quirky line of streetwear called bang! bang! flip streetwear. The collection can be viewed at  www.bangbangflip.com. A complimentary blog which highlights streetwear trends and finds she discovers and uncovers can be seen at www.bangbangflipstshirts.com